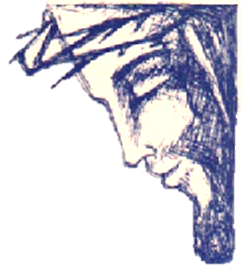 The Crown of Thorns

– Iniquity Caused by our offenses

During this Season of Lent, we would like to meditate

and the cause, why He had to bear it.

In the Gospel according to John, we read: “The soldiers wove a crown out of thorns and placed it on his head, and they came to him and said, “Hail, King of the Jews!” (Jn 19:2-3).

What did this really mean for Jesus? This is the kind of torture the Jews invented uniquely for Jesus.

There is no mention of such torture before the crucifixion in any historical source. On the Shroud of Turin, we can see numerous bloodstains on Jesus’ skull. These were caused by the thorns from the crown piercing blood vessels of His head. The crown of thorns was shaped into a bonnet which covered Jesus’ entire head. Surgeons counted thirteen wounds from the thorns on the forehead and another twenty wounds at the back of His head. They suppose that there were about fifty wounds altogether. Due to the network of nerve endings and blood vessels in the scalp, the crown of thorns must have caused enormous pain and bleeding.

“If we consider that there are more than 140 pain-sensitive areas per one square centimeter of scalp tissue, we can imagine what terrible suffering Jesus bore during this torture of the crowning with thorns” wrote Coppini, Director of the Institute of Anatomy at the University in Bologna. Investigation has confirmed that the blood traces correspond to the anatomy of the blood vessels of the human head. This is more evidence of the authenticity of the Shroud of Turin, since the circulatory system was understood and described in 1593.

How did Blessed Alphonse Marie meditate on the crown of thorns?

Let us consider on the suffering of Jesus

God often tests us, and lets us languish in misery and in drought; but one must not be unfaithful to God, rather continue on the way.

Such a person should not be troubled, but should trustfully continue on the way and put their misery in the arms of God as a child, without tormenting or plaguing themselves. If we torture ourselves about it, we look out for ourselves, which happens out of self-will, pride, and selfishness. God is pleased when we thank Him for everything, even for “aridity” which is in us, because this too is useful. When we bear this suffering in surrender to His will, God will give us more and more love and graces. He will teach us the inner humility, self-denial, self-knowledge, and the knowledge of God.

In inner dryness, this is achieved, if we are not only completely devoted to ourselves, but thank God for it, because we deserve nothing better. This is an important lesson!

What does Jesus being crowned with thorns, teaches us?

Evangelist John says, “The soldiers wove a crown out of thorns and placed it on his head, and they came to him and said, “Hail, King of the Jews!” (Jn 19:2-3) Before our eyes is an interesting picture… Continue reading